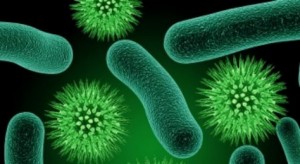 Bacteria are single celled organisms that are too small to see without a microscope. Unlike higher animals, they do not have a nucleus in their cells. They are one of the simplest forms of life but are still incredibly numerous and successful. It is estimated that up to 50 million bacteria may be living in a single gram of garden soil while a milliliter of fresh water may hold a million bacteria.
Bacteria are classified by their basic forms: 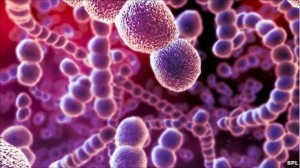 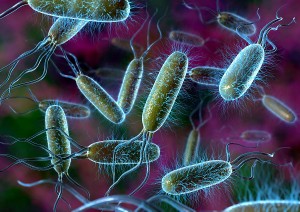 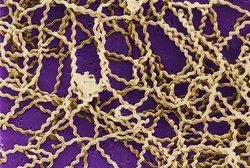 Bacteria also come in two basic forms based on a staining test. Gram positive bacteria take up the crystal violet stain used in the Gram staining method of bacterial differentiation while gram negative bacterial species do not. Streptococcus and Staphylococcus bacteria that cause Legionnaire’s disease and salmonella food poisoning are both gram positive. The bacterial species that causes Gonorrhea, Neisseria gonorrhoeae, is gram negative.

Another way to differentiate bacteria is by whether they need oxygen (aerobic bacteria) or do not need oxygen (anaerobic bacteria). Some anaerobes are beneficial to humans, but others can cause illnesses, such as appendicitis, diverticulitis, and gingivitis. Characteristics of an anaerobic bacterial infection are bad-smelling pus, the formation of abscesses, and the destruction of tissue. Aerobic bacteria can also be either harmful, like Staphyloccus, or helpful, such as the bacteria that break down sewage in waste water treatment systems.

There are thousands of species of bacteria that we come into contact with in our lives. Most are harmless, some are beneficial and, luckily, only a few cause disease. Those that do are called pathogens. A pathogen is any organism that can cause a disease.

The relationship between a bacterial species and its host is fluid and changing. Bacteria have short lifespans and produce large numbers of offspring so they can adapt quickly to changing conditions. They can evolve to adapt to new hosts or to become resistant to treatments and medicines such as antibiotics.

Hosts change more slowly because they have longer generation times and fewer offspring. However, they can develop resistance over time and evolve new defense mechanisms to fight infections. Many pathogens that were deadly when they first appeared in human populations are no longer as virulent as they once were. This has occurred as the human population exposed to the pathogen has changed. The weaker and more vulnerable victims die. Those that survive pass on their resistance to their offspring.

Bacteria are infamous for their ability to develop resistance to antibiotics. New strains of syphilis, gonorrhea and Staphyloccus bacteria have developed that are not affected by penicillin and other commonly used antibiotics. This is a dangerous example of evolution in action. It is a biological arms race between pathogens and their hosts that is constantly changing. It tests our ability to adapt and survive as a species and as individuals.

HOW BACTERIA INVADE A HOST

Bacteria live in soils and waters. Everything we touch has bacteria on it. Most are not inclined to infect us but a few are actively seeking a host. These are the pathogenic bacteria. 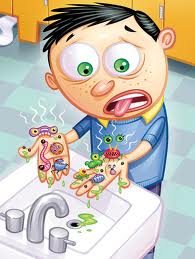 Our bodies are built to fight bacteria and other small invaders. Our largest organ is our skin, which is a tough wrapping that is designed to resist infectious, pathogenic organisms like bacteria. However there are bacteria that are adapted to live on our skin. They can tolerate the dry salty conditions and live on dead skin cells in return. They are part of a normal healthy body flora and fauna from the mites in our eyebrows to the bacteria in our guts and on our skin. Many are harmless, some are very useful, even necessary, for our survival and a few are pathogens, ready to harm us for their own purposes of survival and reproduction.

Most of these pesky and sometimes dangerous species enter via our orifices, like the mouth, nose, eyes and genital openings or via cuts and abrasions to our skin. Bacteria adapted for living in warm, wet environments often cannot survive away from a body for very long. These species need direct contact to transfer from one host to another, so kissing and sexual acts are perfect for spreading bacteria from one body to a new host.

Finding new hosts is the most dangerous and yet most vital part of the pathogenic bacterial life cycle. This is why evolution favors parasites that do not kill their hosts. The longer the host lives, the more opportunities are available for spreading to new host individuals. There is no advantage to the parasite to kill its host before transmission to new hosts has been successful. This is why over time many bacterial diseases have become less virulent and deadly.

Once a pathogenic bacteria enters a new host, millions of years of evolution kick into action as coded instructions in the bacterial DNA are acted upon.  The bacteria journey to the organs which they evolved to infect. Once in the most favorable environment, they multiply. In the process, they produce chemicals that are toxins to the host, causing the development of disease symptoms.

Our bodies do what they can to fight the disease. They produce antibodies. They send white blood cells to kill the invaders. Many of the disease symptoms are actually caused by the host’s body as it fights the disease. Fever occurs as the body raises its temperature to kill the invaders. Pus is made up of the dead bodies of both bacteria and white blood cells. If the host body is healthy with a strong immune system, the invader can be defeated. However, in many cases it has already been passed to a new host and in this sense, the bacterial disease has won. It does not matter that those left behind are doomed to die. If the infection has spread to new hosts, then the disease organism has been successful.

This short video shows how bacteria cause disease.