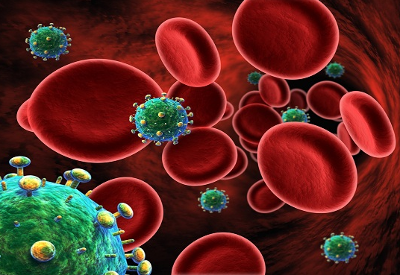 First reported in the United States in 1981, the AIDS epidemic has now infected more than 30 million people worldwide. One million are infected in the USA. In some African countries over 20% of the population is infected. The epidemic is growing most rapidly among minority populations and is a leading killer of African-American males. Infection rates are six times higher in African-Americans and three times higher in Hispanics than in Caucasians.

HIV / AIDS is now one of the leading causes of death in male adults between 25 and 44 years of age. More than 50% of the reported AIDS cases in 1992 were among men with homosexual and bisexual contacts, but this percentage has been declining over the past few years.

Infection in the female population has also risen. AIDS is now recognized as the fourth leading cause of death in women.  Anyone can be infected and it is no longer affecting just one portion of the population.

The impact of AIDS on mortality is most noticeable in larger metropolitan areas, but is also increasing in smaller areas across America and worldwide.

At this time there is no cure for HIV/AIDS.

*You can only be born with AIDS if your mother had AIDS when pregnant.

AIDS is a combination of signs and symptoms which occur together due to the HIV infection as well as other infections that occur as a result of the immunodeficiency.

The definition of AIDS relates to:

There are over 26 clinical conditions affecting people with advanced HIV disease. These conditions are usually opportunistic infections, which can sometimes be fatal. This is because the immune system is so damaged by HIV that it is unable to fight off other microbes.

HIV stands for Human Immunodeficiency Virus, the virus that causes AIDS. It is an infection of the immune system which destroys the body’s ability to fight infections. HIV may also enter a cell and then remain quiet for a long time. Drug therapy only destroys the active virus. HIV infects the immune system cells known as T Lymphocytes, thereby weakening the entire system.

HIV has been located in fluids such as:

It appears that the disease can only be transmitted through:

People can be infected and NOT look sick or even have AIDS but can still transmit HIV. This is a problem for drug therapy because drugs destroy the virus while it is active.

This video helps to explain the process:

The AIDS virus is transmitted from one person to another through several methods:

Prior to 1985 HIV was frequently transmitted by blood transfusions because there was no effective way to test blood for the AIDS virus.

In 1985, heat-treating techniques to destroy HIV in blood products was introduced. Because of this, the risk of acquiring HIV from transfusions is now extremely small.

The virus can be spread in:

The infection can be spread from unprotected sex (sex without condoms) with an infected partner, including:

and is spread from:

The virus can enter the body during sex through the:

You are also at risk if you have another sexually transmitted disease such as:

These diseases make you are more susceptible to acquiring HIV infection during sex with an infected partner.

HIV has been detected in the saliva of infected individuals. However, no evidence exists that the virus is spread by contact with saliva. Tests show saliva has natural compounds that inhibit the infectiousness of HIV. However, the risk of infection from so-called “deep” kissing, involving the exchange of large amounts of saliva, is unknown.

HIV has not been found to spread through:

Studies of families of HIV-infected people have shown clearly that HIV is not spread through:

There is no risk of transmission through:

or through touching objects such as:

HIV can be spread from Mother to infant during:

During pregnancy or birth women can transmit HIV to their fetuses. Approximately 1/4 to 1/3 of all untreated pregnant women infected with HIV will pass the infection to their babies. It can also be spread to babies through the breast milk of infected mothers.

If these babies lack symptoms, a definitive diagnosis of HIV infection using standard antibody tests cannot be made until after 15 months of age. By this age babies are unlikely to still carry their mothers’ antibodies and will have produced their own if they are infected.

Opportunistic infections common in people with AIDS cause such symptoms as:

Children with AIDS are prone to the same opportunistic infections as adults. As well they may experience severe forms of bacterial infections such as:

Cancers of the immune system (lymphomas) which are more aggressive and difficult to treat in AIDS sufferers. They appear in light-skinned people as:

People with AIDS may experience phases of intense life-threatening illness followed by phases of normal functioning. However, many people are too debilitated by the symptoms of AIDS to hold steady employment or do household chores.

Less than 50 people are known who were first infected with HIV over 10 years ago and who have not developed symptoms of AIDS.

Studies are being undertaken to determine the causes for this, such as:

HIV can lay dormant until years after infection. In untreated cases the average time for the disease to develop is 10 years or more, or within 2 years in children born with HIV.

However, HIV infection is also associated with an acute illness in many infected persons. This illness, called acute HIV infection, begins within 1-3 weeks of exposure and usually involves a combination of symptoms.

Periods of asymptomatic infection is highly variable with some people:

Stages of the HIV Infection

The AIDS test is a test that measures the immune response to HIV, consisting of antibodies that are generated in response to the infection.

The Standard AIDS Test measures antibodies. These take time to develop, so in the very early stages of infection there may be a negative antibody test even though the person can be infected.

Under these circumstances HIV infection can be checked by measuring the virus in the blood using either:

Tests should be carried out on:

The standard blood test for HIV is negative in persons with acute HIV infection, so a special blood test has to be used if this diagnosis is suspected.

There are two tests to diagnose acute HIV infection:

Tests should be carried out:

On persons who have had a known exposure to the infection through:

Standard blood test becomes positive about 4-6 weeks after infection. HIV is mainly detected by testing a blood sample for the:

HIV antibodies generally do not reach detectable levels until 1-3 months following infection. Sometimes they take up to 6 months to be generated in large enough quantities to show up in standard blood tests.

HIV testing is also carried out on samples of:

Early testing for HIV infection should be carried out as soon as antibodies to the virus develop to enable:

HIV testing and counselling are available in most doctors’ offices or health clinics. Individuals can be tested anonymously at many sites if they have concerns about confidentiality. In addition, blood samples for anonymous HIV testing may now be collected at home. Home-based test kits are available by telephone order or over the counter at pharmacies.

If a person is highly likely to be infected with HIV and yet both tests are negative, a doctor may test for the presence of HIV itself in the blood. Then a repeat antibody testing is carried out at a later date, when antibodies to HIV are more likely to have developed.

When AIDS first surfaced in the United States, no drugs were available to combat the underlying immune deficiency and few treatments existed for the opportunistic diseases that resulted. However, during the past 10 years, therapies have been developed to fight both HIV infection and its associated infections and cancers.

The Food and Drug Administration (FDA) has approved a number of drugs for the treatment of HIV infection including:

These drugs slow the spread of HIV and delay the onset of opportunistic infections. The drugs do not prevent transmission of HIV to other individuals

Also available for use in combination with other antiretroviral drugs during stages of HIV infection are Non-nucleoside reverse transcriptase inhibitors (NNRTIs) such as:

Virus replication is interrupted at a later step by anti-HIV drugs, called protease inhibitors such as:

HIV can become resistant to each class of drugs, so a combination treatment is necessary to lower the amount of virus in the blood. However this cocktail does not result in complete eradication of the virus. Persons who have stopped the drug cocktail even after two years of treatment have generally had a rapid return of the virus.

Antiretroviral drugs do not cure HIV infection or AIDS and can have severe side effects:

If the loss of blood cells is severe:

Protease inhibitors can interact with other drugs resulting in serious side effects such as:

used to treat yeast and other fungal infections

Overall, a thorough health regime that supports the body and prevents destruction and imbalance within the system is one of the most effective methods of maintaining control of the AIDS/HIV condition. A great source of health articles and tips is the GHS Health Blog.

It is still unproven whether antiviral drugs given after exposure to HIV can prevent infection. There are trials going on in most large cities to treat people who have been exposed to HIV and this is referred to as “post-exposure prophylaxis.”

In carefully controlled experiments, doctors are trying to determine if the immune system, the body’s natural defense mechanism, can keep the virus under control after drug therapy is stopped.

Results show that persons who are treated with potent antiviral drugs (often referred to as HAART – highly active anti-retroviral therapy) develop strong responses to the virus as soon as they become infected, possibly strong enough to successfully control the virus.

About 1 in 100 HIV infected persons is a so-called long-term non-progressor, meaning that they have been infected for up to 20 years and still have a normal CD4 count and low viral load, showing the virus has caused little damage so far.

A number of different methods are being tried to make an effective AIDS vaccine. Since antiviral drugs are extremely expensive, the only hope for worldwide control of HIV is the development of an effective vaccine. Clinical trials of AIDS treatments involve comparing the effects of one treatment to another.

Because many people infected with HIV have no symptoms, it cannot be known with certainty whether a sexual partner is infected, unless he/she has been tested repeatedly for the virus or has not engaged in any risky behavior.