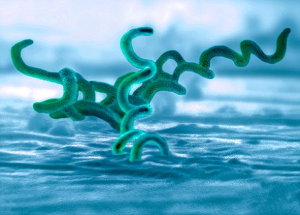 ——— Information and pictures on Syphilis, a common sexually transmitted disease. Information includes symptoms, diagnosis, treatment, transmission, prevention and other general information. ——- Syphilis is a sexually transmitted disease (STD) caused by a bacterium (Treponema pallidum). The initial infection causes an ulcer at the site of infection. Syphilis was once incurable. Now it can be effectively treated with antibiotics. Unfortunately some antibiotic resistant strains are developing, so research must continue. Early symptoms of syphilis are often mild, so treatment may not not sought. Over time, the bacteria moves throughout the body, causing damage to many organs. Having syphilis also increases the risk of contracting and transmitting the human immunodeficiency virus (HIV). The disease is divided into four stages:

An untreated infected person may infect others during the first 2 stages which usually occur over the first 1-2 years after infection. Even though untreated, syphilis is not contagious in the late stage. However serious complications can occur:

In the fight against the spread of syphilis, research is being carried out to find a vaccine. Researchers are also studying the effects the syphilis bacteria have on the immune system. The genome of the bacterium has now been sequenced which will be invaluable in diagnosing, treating and vaccinating against syphilis. ———–

The bacterium can pass through broken skin on the body. Syphilis can be spread via close skin-to-skin contact such as during sex. Moist areas such as the anus, genitals, and mouth are more susceptible to infection but syphilis contracted in any region of the body. Syphilis is highly contagious when there is an active outbreak of ulcers, sores (chancre) or a rash. In an infected person, the bacteria spread from the initial ulcer to the skin or mucous membranes of:

The syphilis bacteria are fragile and infection is usually spread by:

The chancre usually appears on the part of the body exposed to the partner’s ulcer, such as:

These usually disappear within a few weeks, whether treated or not. If left untreated during the primary stage, about one-third of cases will continue to chronic stages. Secondary syphilis The most common symptoms include:

Active bacteria are present in the sores, so physical contact (sexual or nonsexual) with the broken skin of an infected person may result in  transmission of the disease. After several weeks or months the rash seems to heal itself. Other symptoms include:

These symptoms may occur but will usually disappear without treatment. The secondary stage of secondary syphilis appears 2-4 months after infection. It usually lasts several weeks and often recurs over the next 1-2 years. Latent stage syphilis A stage of infection in which the bacteria persist in the infected person’s body without causing visible signs or symptoms. Latent syphilis is subdivided into: Early

Tertiary (Late) syphilis A minority (up to 30%) of individuals with untreated syphilis may develop tertiary syphilis with lesions developing many years after the initial infection. The lesions can be benign, causing no serious disability, or they may develop in vital organs such as the:

These lesions can cause:

Some syphilis cases (especially latent or late stages), need to have a lumbar puncture (spinal tap) to check for infection of the nervous system. Other clinical signs of syphilis (late) include: Inflammatory lesions of the:

Occasionally other areas of the body may be affected such as:

The bacteria often invade the central nervous system during the early stages of infection. Approximately 3-7% of persons with untreated syphilis develop neuro-syphilis. Some people never develop any symptoms. Others experience headache, stiff neck, and fever, resulting from inflammation of the lining of the brain. Seizures may also occur. If blood vessels in the brain are affected by the bacteria, symptoms similar to a stroke can develop, such as:

It can take up to 20 years to develop neuro-syphilis. Neuro-syphilis is difficult to treat, especially for those with HIV infection. The widespread use of antibiotics makes modern-day syphilis harder to detect as there may be no genital symptoms, or any other symptoms of secondary syphilis. Effects of Syphilis in Pregnant Women An untreated pregnant woman with active syphilis will pass the infection to her unborn child:

Hepatitis screening should be done as well. A fetal death taking place after a 20-week gestation or at delivery to an infected mother is classified as a syphilitic stillbirth. Babies with congenital syphilis can have symptoms at birth, or symptoms can develop two weeks to three months later, including:

*The moist sores of congenital syphilis are infectious. When infected infants become older children and teenagers, late-stage syphilis symptoms may occur, including damage to:

The rise in infant syphilis morbidity (death) has become a public health concern that warrants attention. ———- Photos of Syphilis Symptoms ——-

Because the early symptoms of syphilis are similar to many other conditions, people who are sexually active should consult a doctor about any unusual rash or sore in the genital area. Three methods may be used in diagnosis of syphilis:

Bacteria Identification A surface scraping from the ulcer or chancre is taken and examined under a special ‘darkfield’ microscope to detect the bacteria. Accurate clinical diagnosis in the newborn is possible only with positive ‘darkfield’ findings from skin lesions or the placenta. Cord blood should not be used for infant serologic testing because the incidence of false positives and false negatives is high. Blood Tests False-negative results do not show signs of infection despite the presence of syphilis can occur for up to 3 months after infection. False-positive tests also occur,  so repeated tests are often necessary to confirm the diagnosis. The blood-screening tests most often used are:

False-positive results showing signs of infection when it is not present occur in people with:

A confirmatory blood test is carried out when the initial test is positive, such as:

Syphilis antibodies (proteins made by a person’s immune system to fight infection) can be also detected.  Once antibodies are formed, they remain in the body for many years. It is hoped that a diagnostic test that does not require a blood sample can be produced. Tests are being carried out on saliva and urine to see if they produce comparable results to blood. ——

Syphilis is treated with penicillin, usually administered by injection. Within 24 hours of beginning treatment, the person will no longer  be capable of infecting others. Some people, however, do not respond to normal doses of penicillin. Therefore, it is important that people being treated for syphilis have periodic blood tests to check that the bacteria have been killed. Persons with neuro-syphilis may need to be retested for up to 2 years after treatment. People with an allergic reaction to penicillin should consult their doctor for appropriate antibiotic advice. Safe, effective, single-dose oral antibiotic treatment for syphilis is being sought for people who are allergic to penicillin (10% of population). Proper treatment in all stages of the disease will cure the disease. However, in late syphilis, damage already done to body organs cannot be reversed. The serology or treatment of infected pregnant women under certain conditions may present unusual signs. HIV positive persons may have unusual syphilitic infections often with central nervous system involvement. Treatment failures are rare but do happen, especially with AIDS victims. When this happens, neuro-syphilis may develop, because of an impaired immune response in the HIV infected person (Seronegative secondary syphilis). Repeated blood tests are necessary for at least a year after treatment to monitor possible treatment failure. People who have had tertiary syphilis should be followed up for many years. Back to the Top ——–

During the active stages of infection open sores may be visible and infectious. Any contact with infected sores, infected tissues and body fluids must be avoided to prevent spread of the disease. Methods of prevention include:

Testing and treatment early in pregnancy as a routine part of prenatal care is the best way to prevent congenital syphilis in infants. Health personnel working with the newborn should be aware of cases and notify the appropriate authorities, so that care and follow-up treatment can be given. Early detection and treatment of syphilis is essential in order to prevent the spread of this potentially fatal disease. For more information watch this video: