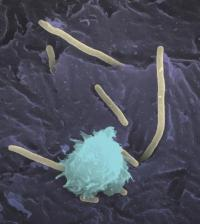 Information and pictures on Urinary Tract Infections (UTI), conditions that can sometimes be caused by transmitted through sexual activity. Information includes symptoms, diagnosis, treatment, transmission, prevention and other general information.

The urinary tract is made up of the following organs:

There are two sphincter muscles which tighten around the urethra to prevent urine from leaking out:

When the bladder reaches a certain capacity, the brain sends impulses::

Conditions that cause symptoms of urinary tract infections include:

Urinary tract infections (UTIs) are caused by bacteria that invade the urinary system and multiply, resulting in an infection. About 8-10 million people become infected each year.

Women get Urinary tract infections (UTIs) more often than men, although men and children can also get them.

Bacteria from the rectal area sometimes enters the urinary tract through the urethra to the bladder and causes an infection. About 80-90% of urinary tract infections are caused by Escherichia coli (E. coli), the bacteria normally found in the intestinal tract and rectum.

If pain is the predominant symptom, interstitial cystitis may be considered.

See your doctor or health professional if the symptoms persist for more than 24 hours. Get immediate medical treatment if more severe symptoms occur such as:

Women get the infection more often. This is because it is much easier for bacteria to enter the urethra and work its way up into the bladder as it is so close to the vagina and the anus.

Some factors that may result in urinary tract infections are:

Some women may have an actual physical problem which predisposes them to urinary tract infections (UTIs). A physical examination and medical history will determine if there is any problem.

Catheters or tubes placed in the bladder:

Infections can be caused by the bacteria:

Your doctor or health professional will check your symptoms and test your urine, which is essential as other conditions have similar symptoms, including:

If there are bacteria in your urine several different antibiotics may be prescribed to treat uncomplicated infections.

The regimen is usually:

For recurrent infections a urinary analgesic, such as Phenazopyridine, may be prescribed for the pain.

If left untreated infections can result in:

The recurrent infection usually stems from a different strain or type of bacteria from the original urinary tract infection (UTI).

If a pregnant woman develops a urinary tract infection (UTI), it often travels to the kidney causing pyelonephritis, due to hormonal changes and fluctuations and increased pressure on the bladder.

Infection can occur when vaginal tissues start to break down due to a decrease in estrogen levels.