How Protozoa Cause Disease 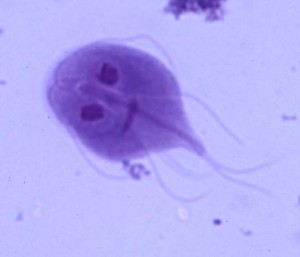 How Protozoa cause disease

Protozoa are one of the groups of animals that can cause disease in humans. This article describes the basic kinds of protozoa and how protozoa cause disease in both animals and humans. It is not intended to be used to diagnose conditions.  It is for information because knowledge is a powerful tool in fighting disease and maintaining health.

Protozoa are single celled animals.  They are so small that they can only be seen through a microscope. They are one of the main disease-causing organisms along with bacteria and viruses.  Unlike protozoa and bacteria, viruses do not have a cell structure. Protozoa differ from bacteria by having a nucleus to hold the genetic material (DNA) of the cell.   In bacteria, the genetic material floats free in the cell so they are considered to be more primitive than the Protozoa.

Protozoa are classified or grouped by the way that they move.  The simplest form of movement is called amoeboid after the protozoan known as the Amoeba.  Amoeboids have no structures to help them move.  Instead they shove their internal jelly-like substance, called cytoplasm, into the side of the cell membrane in the direction they want to move.  The cytoplasm pushes the cell membrane forward into a foot-like extension called a pseudopod. The rest of the cell follows and the amoeboid protozoan moves forward.

Amoeboids can also use this method to capture and consume their prey.  When an amoeba finds a cell to eat, it sends pseudopods flowing around both sides of the cell to capture it.  Then the amoeba secretes chemicals to dissolve the prey so the tiny predator can absorb the juices.

Predators are not the problem. The amoeboid protozoa that concern us here are the pathogens: those that cause disease. The best known amoeboid pathogen causes dysentery. It is called Amoebic Dysentery because it is caused by an amoeboid protozoan.

Watch an amoeba in action

The second type of protozoan are known as flagellates. A flagellum is a whip-like tail on the protozoan. It is used to move the cell forward by lashing back and forth in the medium where the protozoan lives.  In free living flagellates, it beats in the water and propels the flagellate around as it hunts for food or escapes from predators.

Flagellate pathogens use their flagella to move through the bloodstream or the gut, depending on where they live.  The disease Giardia is caused by a flagellate protozoan of the same name. It moves through the gut causing the nasty symptoms of that disease. Flagellates can have from one to many flagella. Giardia has eight.

Watch of video of flagellates:

Ciliates use the third method of propulsion. Their cells are lined with tiny hair-like structures called cilia. When the ciliate wants to move forward, it beats the hairs on the back of the cell and the animal moves forward. The animal called Paramecium is a ciliate. Only one ciliate causes disease in humans. Balantidium coli causes the disease balantidiasis in humans. The rest of the ciliates are free living and not a problem for us.

(Watch a video of ciliates :

What are Pathogenic Protozoa?

Pathogenic protozoa have evolved a parasitic life style.  They have found a warm and safe environment in which to grow and reproduce inside the bodies of mammals. The diseases they cause are side effects of their parasitic lifestyle.  They are not inherently evil. They are not trying to harm their hosts. In fact, over time, most parasites and hosts adapt to each other until very little harm is done. It does not benefit the parasite to kill its host.  It needs the host alive so it can survive.

However, the pathogen’s first priority is to survive. It must find a host. It must infect that host and then reproduce. And then it must find a new host for its offspring.  If the host is hurt in the process, that means nothing to the parasite, as long as the host survives long enough for new hosts to be infected.

Some parasites are pathogenic. They produce chemicals that are very harmful, even fatal to their hosts. If they were harmless, they would not be called pathogenic.  We are hosts to many harmless microscopic life forms. Our skin and guts swarm with bacteria that in some cases are even helpful to us. But we are also potential hosts to pathogens, species that harm us while they exploit us for food and a safe place to live. Understanding how they work is an important way for us to protect ourselves from pathogens.

How Protozoa cause disease

The first step in causing a disease is infection of the host.  That is why we differentiate between a Sexually Transmitted Infection (STI) and a Sexually Transmitted Disease (STD).  Some people are infected with a parasite such as the cold sore virus Herpes so they have an STI but they are not affected by it and so they do not have the disease itself (check this link for a more detailed description of the difference between an STI and an STD)

There are several ways that a parasite can infect a host. Many parasites travel through dirty water. Water borne pathogens are common in places where the water is untreated and contaminated by sewage.  It is ugly but the best way for such a parasite to infect a new host is to travel out of the old host in feces and then get back into a new host when water contaminated by sewage is consumed.

Another way is by contaminated food. Again, the pathogen leaves the host via the digestive tract in the feces. Perhaps this person is a worker in the food industry and does not wash their hands after going to the toilet. The parasite then travels to the food that the worker prepares and is then injested by the unsuspecting consumers. It is amazing how many people still do not wash their hands properly! The E coli bacteria, while essentially harmless, is used by scientists to look for fecal contamination in foods.  We all have this bacteria in our guts. If it is present on food, it is an indication of fecal contamination. The flagellate protozoan Giardia is spread this way.

A third way for pathogens to infect a host is through sexual activity. Sexually transmitted diseases are a huge problem because it is a perfect way for a parasite to travel from one host to another quickly and easily. The major STD caused by a protozoan is Trichomoniasis, which is caused by the flagellate protozoan Trichomonas.

watch a video of Trichomonas

Once in a new host, a parasite travels to a site where it can grow and reproduce. In many cases, such as the E coli bacteria, no harm is done to the host. The problem arises when the parasite produces chemicals that are harmful or pathogenic to the host. This is when an infection can become a disease because the host is harmed. As the parasite multiplies, the amount of harmful byproducts increases and symptoms develop. If untreated the condition worsens and the host is said to be diseased. If no treatment is available, the condition can eventually kill the host. If this happens before the parasite can infect another host, both the host and the parasite die. So there is a lot of pressure on a pathogen to find a new host before this happens.

With sexually transmitted pathogens, this is easy if the host is sexually active and has more than one partner.  This may be why so many religions frown on sexual activity outside of marriage. Before the invention of the microscope, sexually transmitted diseases were seen as punishment for sexual activity. Now we know that it is just the work of nature, as these parasites have evolved to use sex as a method of infecting new hosts.  However the message is still this: if you want to avoid STDs then practice safe sex or stick with one partner or abstain from sex.  Otherwise there are pathogens out there that are looking for new hosts and you might end up being one.

How to protect yourself from Protozoa that cause disease

We cannot see these organisms. We cannot use a microscope every time we drink a glass of water or eat some food or have sex.  We have to protect ourselves with knowledge and good hygiene practices.  Wash our hands with soap and hot water after using the toilet. Practice safe sex. Drink only water that we know is clean and safe, especially when travelling. Eat at restaurants that practice good hygiene. And go to a doctor if you have any suspicious symptoms. Be aware: the pathogens are out there!

The Difference between STD and STI