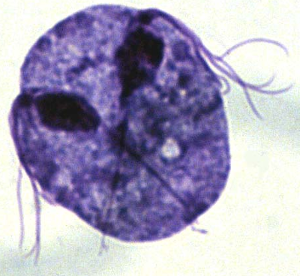 Information and pictures on Trichomoniasis, a sexually transmitted disease. Information including symptoms, diagnosis, treatment, transmission, prevention and other general information.

Trichomoniasis is a common sexually transmitted disease caused by a single-cell parasitic protozoan, Trichomonas vaginalis, which was first discovered in 1836. T vaginalis has five distinctive hair-like flagella which are used to move the cell around.

About 5 million Americans develop trichomoniasis every year. It has been found in:

It is often diagnosed in patients who are already infected with other STDs such as:

Trichomoniasis infection frequently has no symptoms. There have been rare cases where the incubation period of the infection has covered years, but usually symptoms appear within 4-20 days of exposure, and include:

In Men
Men rarely have any symptoms, however, if symptoms do occur they include:

* Men mostly do not show symptoms but it is advisable to seek treatment if their partner has Trichomoniasis as infection is likely.

The parasite rarely causes symptoms in men and re-infection of women by untreated partners can often occur.
It can be spread during:

Unlike most STDs, Trichomonas can survive for some hours outside the body on infected objects and can be transmitted by sharing:

Trichomonas is a pear-shaped protozoan with 5 hair-like ‘tails’ called flagella (four anterior and one posterior). Protozoans are single celled animals that have a nucleus in their cells. This distinguishes them from bacteria, which have a cellular structure but no nucleus. Flagellate protozoa like T. vaginalis use their flagellae to move the cell around. The presence of the five flagellae and the jerky movements of the cells, when seen through a microscope, are distinctive and assist in its identification.

Trichomoniasis Diagnosis can be made by:

Culture Tests
A culture of the organism or an antibody test may be done, especially in men, as relatively few of the parasites are found in discharges from the penis.

Examination under a Microscope
Samples of vaginal discharge or secretions from the penis are examined under a microscope.

Laboratory Testing
Samples of vaginal discharge or secretions from the penis may be sent to a laboratory to see if Trichomonas is present and may take up to 2 weeks for the results.

Antibiotics are usually successful (cure rate 95%) even though this infection is not a bacteria. It is usually administered in a single dose.

Procedure
Sexual partners need treatment at the same time to eliminate the parasite and to prevent re-exposure and re-infection.

Caution
If taken with alcohol it can cause severe:

5-notroimidazoles
These drugs are successful for both partners.

If left untreated Trichomoniasis can:

Transmission of this parasite from one person to the next may be reduced by:

It has been shown that Trichomoniasis: