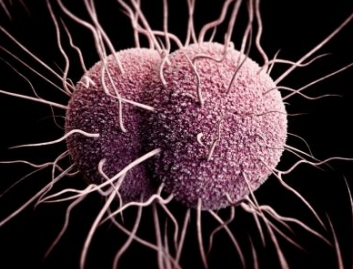 Information and Pictures on Gonorrhea, one of the most common sexually transmitted diseases. Information including symptoms, diagnosis, treatment, transmission, prevention and other general information.

The Gonorrhea germs are found in the mucous areas of the body:

Gonorrhea is the most common reportable sexually transmitted infection (STI) in the United States. An estimated 800,000 cases are reported annually.

Back to the Top

Gonorrhea is spread from mother to child as the child passes through the birth canal during delivery causing eye infections un the baby.

In children, Gonorrhea infection is usually due to sexual abuse. It is found in the:

Back to the Top

Rectal infection in men and women can cause:

Symptoms usually appear 2-7 days after infection in males. However it can sometimes take up to 30 days for symptoms to appear. There are no symptoms at all in 10-15 % of infected men and 80% of infected women.

People with no symptoms are at risk of developing complications from Gonorrhea. They can also unknowingly spread the infection to other contacts. Gonorrhea can be spread from the time of infection until properly treated. Past infection does not make a person immune to gonorrhea. Previous infections may allow complications to occur more rapidly and increase the risk of getting HIV / AIDS.

Many doctors prefer to use more than one test to increase the accuracy of the diagnosis. There are three laboratory techniques usually used to diagnose Gonorrhea:

This is carried out by placing a sample of the discharge from the penis or cervix on a slide and staining it with a dye . The sample is then examined for the presence of the bacteria.

This test is carried out using urine or cervical swabs to detect the genes of the bacteria.

This method involves placing a sample of the discharge onto a culture plate and incubating it for up to 2 days to allow the bacteria to multiply.

Gonorrhea is treated with penicillin or other antibiotics in pill form or by injection. However, the disease is becoming more and more resistant to many standard medications. Antibiotics that are currently used are:

* The antibiotics Ciprofloxacin and Ofloxacin should not be taken if you are:

Gonorrhea and Chlamydia infection, another common STD, often infect people at the same time. A combination of antibiotics is taken which will treat both diseases, such as:

All sexual partners should be tested and treated if infected, whether or not they have symptoms of the infection. If untreated the Gonorrhea infection can spread:

and through the bloodstream infecting:

The most common result of untreated Gonorrhea in women is Pelvic Inflammatory Disease (PID), a serious infection of the female reproductive organs. Gonococcal PID often appears immediately after menstruation and causes:

For more information, watch this video: