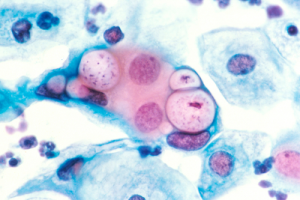 A condition caused by a sexually transmitted organism. Lymphogranuloma information including symptoms, diagnosis, treatment, transmission, prevention and other general information.

Lymphogranuloma inguinale is also known as:

Lymphogranuloma inguinale is an infection of the lymph tissue in the genital area caused by a strain of Chlamydia trachomatis, the bacteria that produce Non-gonococcal Urethritis (NGU). The disease occurs most often

Lymphogranuloma inguinale infects on average about 250-400 people a year in the United States.

Lymphogranuloma inguinale is found on: In Males

In Women the buboes may cause:

Buboes near the anus may cause:

Buboes in the penis or vagina

Buboes in the throat affect

With Lymphogranuloma the process of infection and healing can be accompanied with scar tissue where fibrosis has formed. This scarring can lead to a range of strictures, lymph obstructions and chronic edema. This later stage of the condition where edema and fibrosis is present is known as the final and 3rd stage of Lymphogranuloma. These developments in the tissue are generally permanent. —–

Lymphogranuloma inguinale is spread by direct sexual contact with the:

In Pregnancy and Birth Infected mothers can transmit the disease to their babies at birth It can not be spread from person to person by casual contact, such as:

Diagnosis is usually ascertained by:

to rule-out or check for other STDs such as:

As Chlamydiae are intra-cellular organisms, samples must contain cellular material. This can be obtained:

Culture Test Culture on Cycloheximide treated cells from suspected lesions is the most specific method. The method:

Direct Immuno-fluorescence (DIF) Material from a suspected lesion is used to detect Chlamydia trachomatitis. A fourfold rise in antibodies (both IgM and IgG) usually shows active infection. This method:

Enzyme immunoassay (EIA) This method is suitable for ulcer scrapes or bubo aspirates, but not for rectal samples. The method:

Note Screening for other possible causes of genital ulcerative disease should be carried out, such as for:

Lymph node biopsy may be used to make differential diagnoses with atypical infections and neoplasia.

Lymphogranuloma inguinale is a very persistent bacterium, and penicillins are ineffective in treatment because they can suppress the bacteria without killing them. Early treatment is essential to reduce the severity of the chronic phase. A 3 week program of antibiotics is recommended to kill the infection.

Patients allergic to Cyclines should be treated with Erythromycin.

The systemic spread of Chlamydia trachomatis may be associated with:

Stage 3 Most people recover after the secondary stage without any complication. In a few cases, however, mostly among women, the persistence and progressive spread of Chlamydia trachomatis in anal-genital tissues will cause chronic inflammation and destruction of tissues, which can lead to:

If left untreated the following problems can occur:

Note Before having sex it is advisable to check for anything unusual in your partner, such as:

Douching or urinating after sex does not prevent STDs. If you have had sexual contact with a person infected with Lymphogranuloma inguinale within 30 days before onset of the person’s symptoms you should be: